Two especially attractive catalogs have recently been added to Mertz Digital.  The Farr Nursery Company annual catalogs of 1915/1916 and 1922 both offer a glimpse into the artistic, horticultural and social aspirations of that era. Both catalogs were edited, designed engraved and printed by J. Horace McFarland at his printing company in Harrisburg, Pennsylvania.   McFarland (1859-1948) was an exceptional photographer and graphic artist whose business acumen and energy were astounding.  His leadership roles as President of the American Civic Association, the City Beautiful movement, and the establishment of the National Park Service make him perhaps the most underappreciated figure in the American progressive era.  He was the printer of “American Gardening” and “Country Life in America.”

McFarland was one of the first to apply color processes to commercial printing.  The MacMillan Company contracted with him to print their first edition of the “Encyclopedia of Horticulture.” He edited and printed the American Rose Annual from 1916 to 1944 for the American Rose Society; the ARS McFarland trophy is named in his honor.   McFarland was easily the most important figure in the design, printing and illustration of early 20th century American nursery and seed catalogs.  He convinced hundreds of nurserymen to market their seeds and plants through mail-order catalogs that utilized the latest technological advances in photography, printing, transportation and horticultural merchandising.  His distinctively styled color and black and white photographs and graphic designs have made the Farr Nursery Company catalogs among the most coveted nursery and seed catalogs to collectors.  The McFarland papers are on deposit at the Smithsonian Archives of American Gardens; the EAD finding aid to the McFarland papers are here.

The Farr Nursery Company, founded in 1908 by Bertrand H. Farr, (1863-1924) had a unique long standing association with the legendary scientist and botanist of the New York Botanical Garden, Arlow Burdette Stout (1876-1957). The Farr Nursery Company was the purveyor of Stout’s hybridized daylilies from 1920 until Stout’s death in 1957. Arlow Stout is considered by many to be the father of the modern daylily and the Stout Award, the highest honor of the American Hemerocallis Society was named in his honor. The Arlow Burdette Stout papers are on deposit at the Mertz library and the EAD version of the Stout papers finding aid may be viewed here.

It would be difficult to overestimate the scientific work of Dr. Stout during his long tenure as Director of Laboratories at the New York Botanical Garden. The narrative in the Mertz Library finding aid attempts to put Dr. Stout’s contributions in perspective.

“Without a doubt, Dr. Stout's public renown rested largely on the knowledge and innovation he brought to the breeding of daylilies. His success led Dr. Henry A. Gleason, Head Curator of the Garden in 1938 to remark, "It is not unlikely that the commercial value of the work of Dr. A. B. Stout . . . will exceed the entire cost of the Garden during the forty years of its history."

Unlike Dr. Stout, who was a Columbia University educated PhD in botany, Bertrand H. Farr’s educational background and path to botanical prominence was far more circuitous. Growing up on his father’s Iowa cattle farm, young Bertrand Farr nourished his love for flowers by close observation of the plants and flowers at hand, those native to the American prairie. Despite the apparently primitive cultural opportunities of mid-19th century rural life, something cultivated Farr’s adolescent artistic sensibilities sufficiently that he became “a pianist of considerable gifts.” [ Source: A passion for daylilies (1992) by Sydney Eddison ].  He also wrote poetry, an interest that lasted his entire life, and he often featured his poems on the pages of his nursery catalogs. In the fall of 1883 his pianistic skills earned him acceptance at the New England Conservatory of Music in Boston.  Farr spent two years studying music at the conservatory and while there he also undoubtedly increased his level of horticultural knowledge and sophistication by exploring the many botanical gardens and attractions of Boston including the famous Hovey Nursery, the catalogs of which may be found in Mertz digital here.  Farr’s initial attempts at a professional musical career were less than successful and after years of work in the piano industry in Philadelphia and Boston he returned to Webster City, Iowa.

By 1896 Farr, at age 33, had still not entered the nursery and seed business but his marriage to Anna Willis that year was with hindsight perhaps the precipitating event that culminated in his prosperous horticultural business. Oddly, although he and Anna had grown up in Webster City, Iowa and both were contemporaries at the New England Conservatory of Music, it is said that they did not know each other until they met at the local Congregational church when Bertrand returned from Philadelphia to Iowa earlier that same year.

Soon after their marriage Farr and his wife moved to a scenic Reading, PA suburb named Wyomissing where they were among the town’s first residents.  While continuing to work in the piano industry in Philadelphia he began to purchase acres of Wyomissing real estate, planting hundreds of shrubs, trees and perennials on his new property holdings essentially as a hobby.  Whatever his source of capital, perhaps his wife’s family, his real estate holdings soon numbered eleven lots. The gardening hobby had become an obsession, with Farr also planting specimens on several nearby vacant lots.  When he sold some extra seedlings to neighbors the young trees flourished and his neighbors wanted to buy more.  By 1908 he had published his first mail-order catalog; in 1920 the nursery’s slogan was “Better Plants – By Farr.”

Although Farr built his initial reputation hybridizing  iris and peonies while  holding leadership positions in their respective societies, his contributions to the hybridizing of daylilies was if anything more astounding.

“Between 1908 and his death in 1924, Farr (or his firm after his death) named about a dozen daylilies, introducing only the best six. By modern standards, that is not many. However, no American other than Luther Burbank, with seven, had introduced more than Farr in the first quarter of the Twentieth Century. His Hemerocallis 'Ophir' (Farr, 1924) received the Award of Merit of the Royal Horticultural Society of England in 1931 and is still in commerce.” (Source: AHS http://www.daylilies.org/BertrandFarrAward.html)

Given this background it was natural that the two individuals in America (Stout and Farr) most devoted to the hybridization of daylilies should meet and forge an alliance that would last for many decades outlasting the life of Farr and as Sydney Eddison observed: “influencing the development of the daylily in ways we are only still coming to understand.” 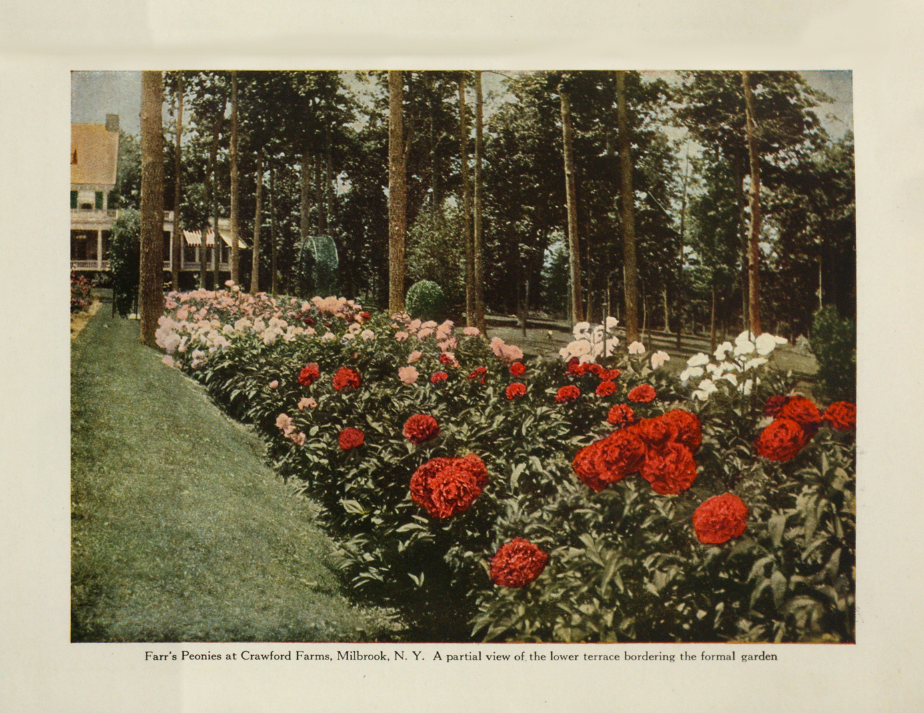 Bertrand H. Farr in his “Dream Garden” with many colored flowers, including roses and peonies, from Farr Nursery Company catalogs in Mertz Digital

Sydney Eddison, in her book “A Passion for Daylilies; the Flowers and the People”, provides an excellent description of the partnership between Bertrand Farr and Arlow Stout.

“At a crucial period in daylily history, Dr. Stout was driven into the arms of the Farr Nursery Company.  The New York Botanical Garden had adopted the position that as a scientific and educational institution, it could not justify the propagation of new daylilies for sale or general distribution.  Fortunately, Bertrand Farr was interested in Stout’s program and agreed to grow and propagate his seedlings with a view to eventually selling named Stout cultivars.  Under the terms of the agreement, which consisted of a handshake between the two, Stout cultivars would not be released until enough stock was on hand to keep the price down to $3 a division.

Accepting this arrangement was altruistic of Mr. Farr.  Hundreds of the seedlings in his care would never qualify for introduction, but they would still require attention and occupy space at the nursery for several years during the trial period.    A year after reaching the “handshake” understanding with Stout, Farr died suddenly on October 11, 1924, at his home of a cerebral hemorrhage.  But the Farr nursery honored the agreement, and for more than thirty years continued to assist with the evaluation and the ultimate distribution of Dr. Stout’s named hybrids.

At the time of Stout’s death in 1957, the Farr Nursery Company had introduced eighty-three of his cultivars. … Stout himself never accepted any money for the sale of his cultivars.  His royalties went into a fund at the New York Botanical Garden to finance his research and to establish the Stout Medal, which was awarded for the first time in 1950.  This medal is the highest honor a daylily cultivar can receive. … Lest modern daylily hybridizers forget the contribution of Bertrand Farr, a silver medal perpetuates his memory.  It is awarded annually to an individual who has achieved distinguished results in the field of daylily hybridizing.  Dr. A.B. Stout was the first recipient. “

Portrait of Dr. A.B Stout of the NYBG;  yellow and orange Stout daylilies offered by the Farr Nursery Company (1943) 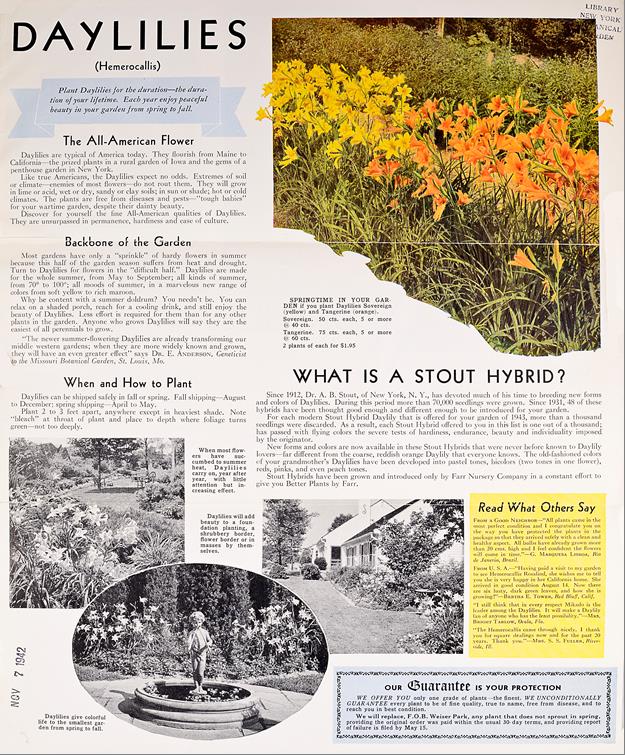 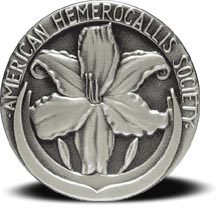 The highest award a cultivar can receive is the Stout Silver Medal, given in memory of Dr. Arlow Burdette Stout who is considered to be the father of modern daylily breeding in North America. (Source: AHS www.daylilies.org)

The New York Botanical Garden has the world's largest collection of Hemerocallis hybrids developed here by Dr. Arlow B. Stout.

"At the height of summer, Daylily/Daffodil Walk is alight with the radiance of daylilies. In all shades of yellow and orange, from blazingly bright to palest pastel, as well as tones of pink and red, 344 different daylilies showcase the diversity of this easy-to-grow perennial. Dr. Stout introduced more than 90 cultivars, including the first red daylily, 'Theron'. Sixty-six of his rare heirloom hybrids are still grown here, along with recent selections that span the spectrum of summer color.”  (Source:http://www.nybg.org/plant-talk/tag/daylily-walk) 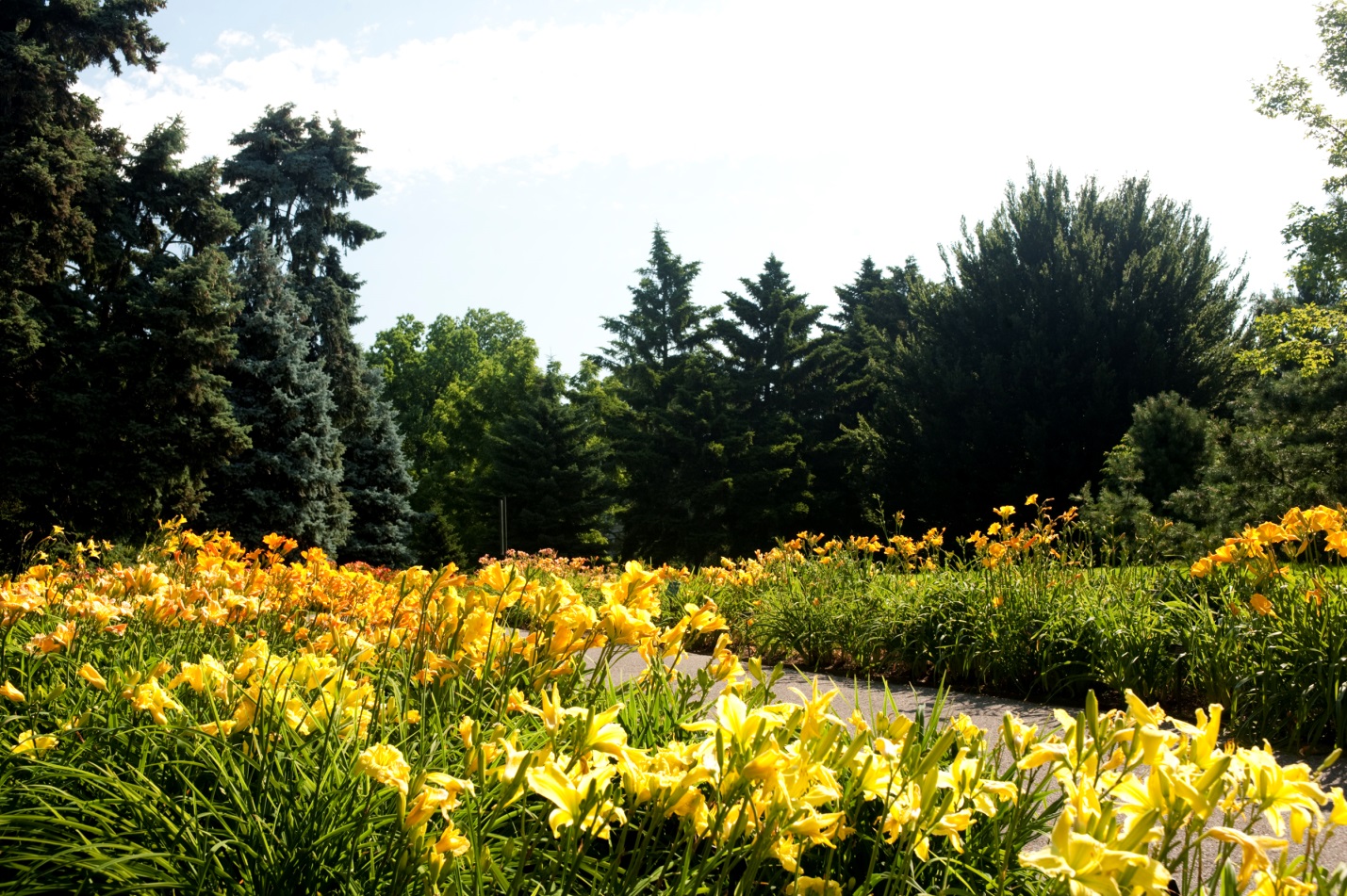 Bertrand H. Farr wrote the text for his nursery catalogs and was given to composing elaborate poems and essays descriptive of his plants and flowers.   His obsession with the beautiful if not always practical aspirations of early 20th century American gardening led him to build what he called a “Dream Garden” an elaborate public display garden near his nursery in Pennsylvania.  In the 1915/1916 catalog Farr wrote:

“It seems like yesterday, though many years have slipped away, since there was a boy’s garden out on the western prairie; then the city where there was no garden—only a memory of a garden that was, or a dream of a garden to be.  Then came Wyomissing, and a man’s garden which was an unrestrained passion for growing things soon filled until it overflowed out into the open fields, a riot of glorious color, an intoxication of delight, like the promise of the rainbow fulfilled.”

Farr's obituary in The Florists Exchange contained this Farr quote: “Blessed is he who has a hobby, and can make it his business.”

Betrand H. Farr Silver Medal of the American Hemerocallis Society given to individuals who have achieved the highest standards in the hybridization of daylilies. (Source: AHS www.daylilies.org) 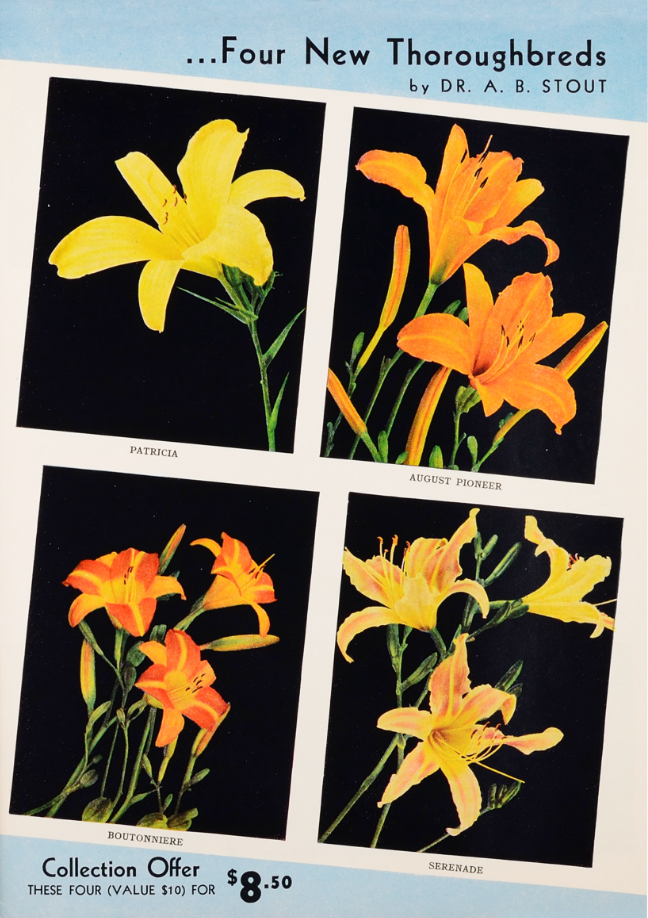 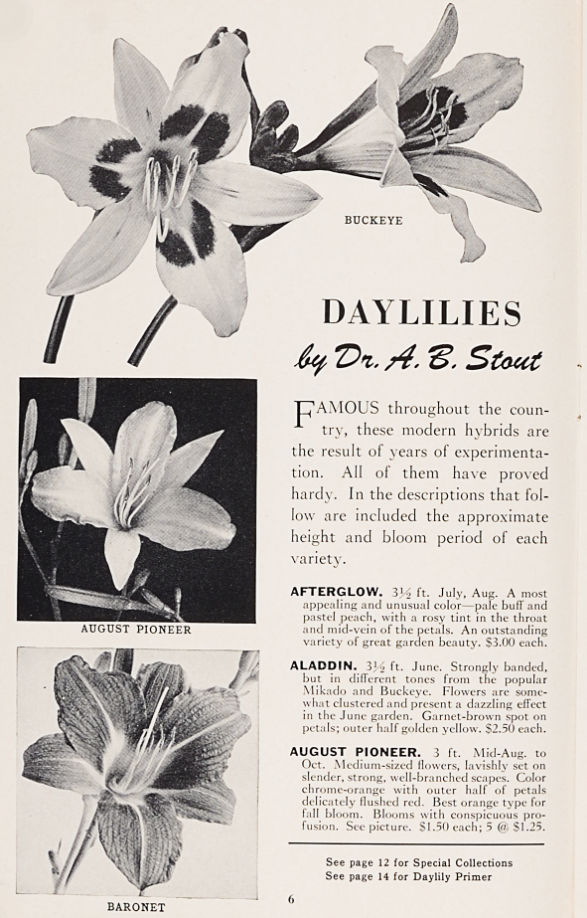 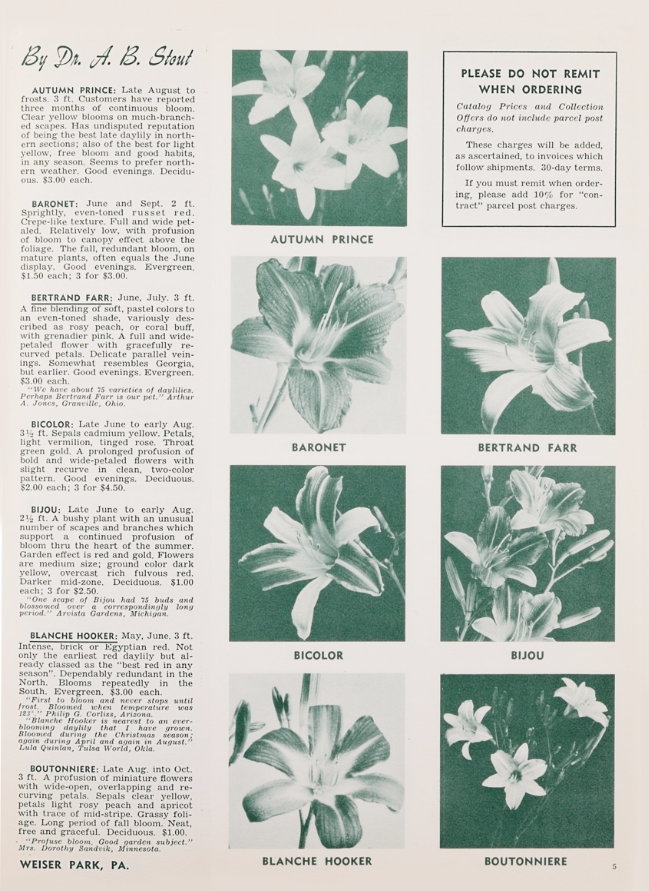 Other Nursery and Seed Catalog Collections