Here are some answers to frequently asked questions about growing orchids.

What type of potting medium should I use?

Orchids are either naturally epiphytic (growing on other plants such as trees; sometimes called "air plants") or terrestrial (growing from the ground). When growing orchids at home, it's important to try to mimic their natural environment. Terrestrial orchids usually grow in the loose leaf litter that covers the rain forest floor, while epiphytic orchids usually have nothing at all around their roots.

Both types of orchids require good drainage and good root aeration to grow. Common orchid mixes are composed of fir bark, tree fern fiber, sphagnum moss, perlite, and charcoal. Epiphytic orchids that need to dry out between watering should be planted in coarse mixes, while terrestrials and epiphytes that naturally thrive in moist environments prefer medium to fine mixes. For the beginner, it's best to experiment with ready-made orchid mixes, found at any garden center, rather than to make your own.

How do I water my orchid, and how often?

Orchids generally need to be watered every 4 to 10 days, depending on the orchid, the home environment, and the time of year. Use tepid water and avoid splashing water on the flowers; they may spot. The best way to water an orchid potted in sphagnum moss is to take it to your kitchen sink and run water through the potting mix until it flows freely through the drainage holes.

Many orchids are potted in a bark mixture. Bark initially repels water before it becomes saturated, so it is important to water until the bark is saturated. If your orchid is not getting properly hydrated, the easiest way to water an orchid potted in bark mix is to soak the pot in a large bowl or small basin full of water. Have the water level come up just below the lip of the pot, so that the bark mixture doesn't spill out. Soak for about 10 minutes to saturate. Allow the water to drain out completely; orchids like a good soak but don't tolerate sitting in water. Uneven watering will result in shallow or uneven root growth.

After you have watered your orchid, feel the weight of the container; it will be heavy. When the potting mixture dries out, the pot will be much lighter. You will eventually be able to gauge your watering schedule by monitoring the weight of your pot. If this sounds too complicated, simply stick a pencil two inches into the bark mixture. If the tip of the pencil stays dry, you need to water your orchid. It's better to under-water an orchid than to over-water it.

Orchids with soft, thin foliage require more water than orchids with harder, thicker, more succulent leaves. Plants with pseudobulbs (a thickened stem that stores water) tend to need less water and should be allowed to approach dryness between watering. Terrestrial orchids tend to thrive when their potting medium is kept moist, whereas many epiphytes need to approach dryness before being watered.

How often should I feed my orchid?

The rule of thumb for orchid feeding is "feed weakly, weekly." Generally, a balanced fertilizer is best, diluted to ¼  strength. You can use an orchid fertilizer or a regular houseplant fertilizer. If you are only watering your orchid once a week, it's important to flush the plant out with water once a month to get rid of any residue salts left over from the fertilizer. It's better to give an orchid too little fertilizer than too much. Liquid or powdered fertilizers that are mixed with water work best.

How do I increase the humidity level in my home?

Another option is to place the orchid on a tray full of pebbles. Add water to the tray, making sure that the water level is slightly lower than the top of the pebbles. The orchid should not sit in water; saturation will kill the plant.

Finally, humidifiers always work well. While some orchids respond well to misting (particularly the thinner leaved varieties), this only acts as a temporary measure.

How much light does my orchid need?

Orchids tend to do best in bright, diffused light. A bright eastern window or set slightly back from a southern window are good placements for orchids. Northern windows tend to be too shady, and western windows work as long as the orchid doesn't get scorched by hot afternoon sun. Often it's about trial and error; you may have to move your orchid around several times before you find a good location.

Your orchid will tell you if it's not receiving enough light. If the orchid has dark green leaves, it needs more light. If it has yellow leaves, it's receiving too much light. The color of the leaves should be medium to light green  (grass color) although there is some variation in leaf color.

How do I get my orchid to reflower?

There are several tricks for getting your orchid to reflower. In nature, orchids experience a 10-degree temperature difference between day and night. This differential is important when trying to initiate flowering, particularly in autumn and winter. Increasing the light that the orchid receives is another important way to trigger flowering. Raising the humidity level encourages flowering (see above). Finally, fertilizing your orchid in the fall with a bloom booster fertilizer (e.g., 10-30-20) that is low in nitrogen and high in phosphorous is another way to encourage blooms.

Where do I cut the flower spike when it is finished blooming?

When most orchids finish blooming, the spike should be cut down to the bottom of the base. Phalaenopsis (moth orchids) are the exception. They will rebloom from an old spike. The spike will have several nodes (swollen areas) on it. When your Phalaenopsis has finished flowering, cut it down to just above the second node. A new spike will form and flower in 8 to 12 weeks. It is important to cut the spike all the way down to the base by midsummer to allow the plant to rejuvenate and grow for the next flowering season. Phalaenopsis leaves will start to flop and look tired if the plant has been flowering for a long time. If this happens, cut back the flowering spike to the base, even if the plant is still flowering.

How often do I have to repot my orchid?

Repotting your orchid is a way of cleaning house; you are cleaning out residue fertilizer salts and dead roots. Eventually, the potting medium starts to break down, the bark chips begin to disintegrate, and the structure that used to support good drainage and aeration deteriorates. It will then become waterlogged, causing the orchid roots to rot. Repotting is therefore an important step in orchid cultivation. In general, repot your orchids after flowering, every 2 to 3 years, or else in the spring before the roots start to grow.

Books to Purchase at NYBG Shop in the Garden

The New Encyclopedia of Orchids
1,500 Species in Cultivation
by Isobyl la Croix 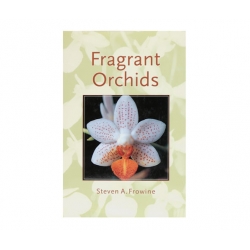 Fragrant Orchids
A Guide to Selecting, Growing, and Enjoying
by Steven A. Frowine