Composters in a Compost Pile 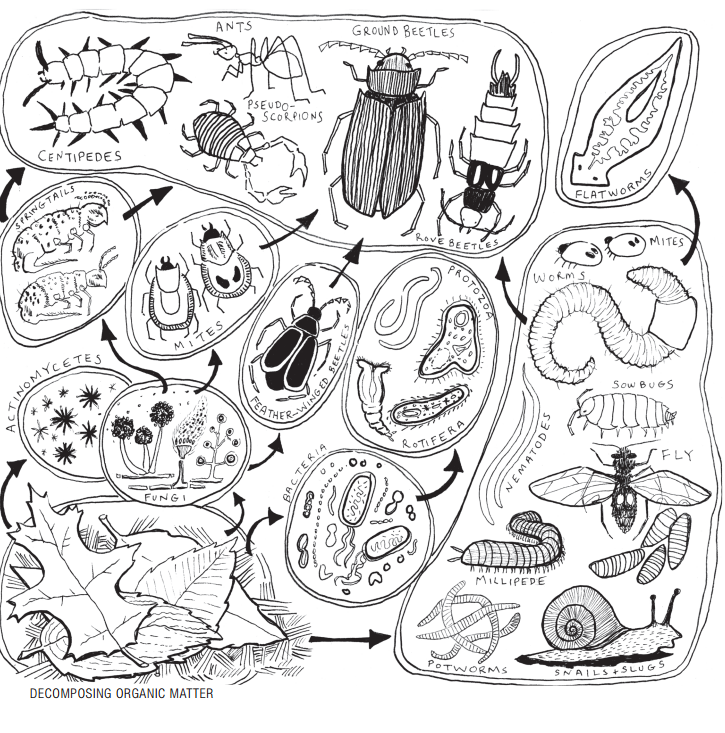 Compost is produced through the hard work of a number of different decomposer organisms that break down organic material and convert it into finished compost. These decomposers are naturally present on the organic materials that you add to your compost pile, and also exist in the areas surrounding your compost system.

Decomposers in a compost pile are part of a complex compost ecosystem in which food, water, air, and shelter are provided by the
material within the compost pile. If any of those essential ingredients are missing, the organisms either slow down or stop working altogether. This web of interdependence is the driving force behind the production of compost.

Some organisms feed on decomposing plant materials, while others feed on other organisms. The two main categories of decomposers are chemical and physical decomposers. Chemical decomposers work by using chemicals in their bodies to break down organic matter into simple compounds for energy. This is similar to how the acids in our stomachs dissolve the food we eat.

Bacteria are the most abundant of the microorganisms found in a compost pile and perform the majority of the decomposition. An important by-product of their work is the generation of heat, which can warm up the pile and attract other heat-loving organisms to assist with the breakdown process.

All of the decomposer organisms in the compost ecosystem are linked by a “what eats what” food web, wherein organisms are classified according to what they eat. There are three levels of consumers in the compost food web: primary, secondary, and tertiary. This web structure keeps the different populations under control and maintains a healthy and balanced compost pile.

Secondary (second level) consumers feed on primary consumers and their waste products. This group consists of physical decomposers which include springtails, mold mites, and nematodes.

The NYC Compost Project, created by the NYC Department of Sanitation in 1993, works to rebuild NYC’s soils by providing New Yorkers with the knowledge, skills, and opportunities they need to produce and use compost locally. Learn more at nyc.gov/compostproject.

About the NYC Compost Project funded by NYC Sanitation

The Department of Sanitation (DSNY) encourages residents to compost yard trimmings and food scraps in their own backyards and community gardens. This kind of composting is not only the least expensive way to manage organic waste, it also recycles nutrients close to where they can best be used to nourish our city’s soils.

If you are interested in composting at home or in your community, the NYC Compost Project provides technical guidance on constructing composting systems and sells low-cost composting equipment. Each site also manages a compost help line to answer questions and to troubleshoot problems over the phone or by email.