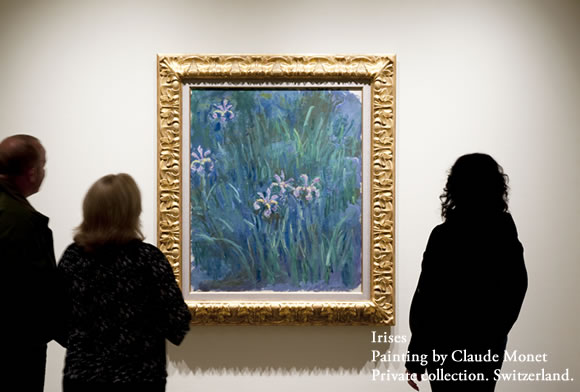 “What could be said about me…a man to whom only his painting matters?
And of course his garden and his flowers as well.”
— Claude Monet

Documenting the role that the iconic garden in Giverny played in artist Claude Monet’s life and work, The Artist in the Garden in the Rondina and Lo Faro Gallery at The New York Botanical Garden brought together for the first time two rarely seen paintings by the Impressionist master, as well as his paint-encrusted wooden palette and an evocative array of historical photographs that showed the artist creating and enjoying his garden.

Monet’s Garden, the Botanical Garden’s multifaceted exhibition devoted to one of the most enduringly popular painters of all time, featured elements in several venues throughout the Botanical Garden, including a seasonally changing interpretation of the glorious flower garden and water lily pond at Monet’s home in Giverny that inspired some of the artist’s most beloved masterpieces.

“The gardens remained a constant in his life,” said Dr. Paul Hayes Tucker, the curator of the exhibition and one of America’s leading authorities on Monet and Impressionism. “He tended to them lovingly and with plenty of money and with hired hands. So they became something larger than themselves. And his efforts right up to his death in 1926 to be able to paint their poetry, their prose, their splendor reminds us not only of his diligence, duty, and discipline, but likewise of his devotion to something that is larger than all of us.”