Emily Dickinson's garden : the poetry of flowers : her life, her poetry, her garden (2010): Home 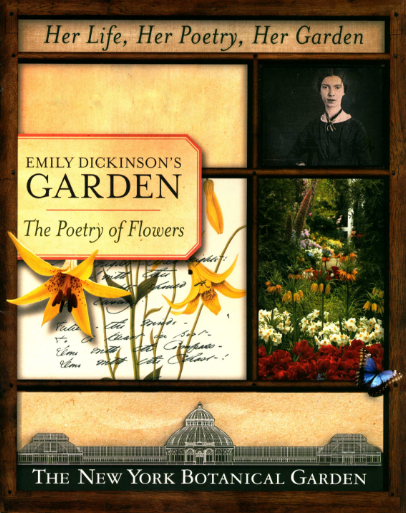 During her lifetime, Emily Dickinson (1830–1886) was better known as a gardener than as a poet. Plants and flowers significantly influenced her poetry and other writings, most of which were not published until after her death. The New York Botanical Garden’s multi-venue exhibition, Emily Dickinson’s Garden: The Poetry of Flowers, illuminated Dickinson’s life and work, the connections that exist between her life and poems, and her study and love of flowers and gardens. Dickinson’s poems have become an integral part of the American literary canon, yet the fundamental impact that plants and flowers had on her poetry is little known by the public. From April 30 through August 1, the Botanical Garden’s exhibition  revealed this new perspective on one of the greatest Romantic poets of the Victorian era, immersing visitors in the garden, life, and poems of Emily Dickinson in contemporary, fresh ways.

An exhibition of 60 fascinating objects—books, manuscripts, watercolors, and photographs telling the story of Emily Dickinson’s life— featured in the Gallery of the Mertz Library. The artifacts provided a rare glimpse of Emily’s world, her reclusiveness, her adoration of flowers and plants, and her reluctance to share her poetry with outsiders. The links between her verse and the plants and flowers that were her motivation were on display, as well as several of her original manuscripts, both poems and letters. A reproduction of her only extant dress (it is believed she wore only white) was on loan from the Emily Dickinson Museum in Amherst. Other lenders to the exhibition were the Jones Library, also in Amherst; Harvard University; and the Rosenbach Museum & Library in Philadelphia.