The Native Plant Society of Oregon was founded in Portland in 1961. It has grown to include 14 chapters located throughout the state. It is dedicated to the enjoyment, and study of Oregon's native plants and habitats.

The Rare and Endangered Plants Committee is actively engaged in many activities promoting conservation, education, and contributing to NPSO’s own Citizens Rare Plant Watch. They also  partner with other organizations to collaborate and aid in conservation efforts. This is a great way to get involved with this organization.

The Bulletin of the Native Plant Society of Oregon is published 10 times a year. This covers a wide variety of topics of interest to members. You can find it on their website. 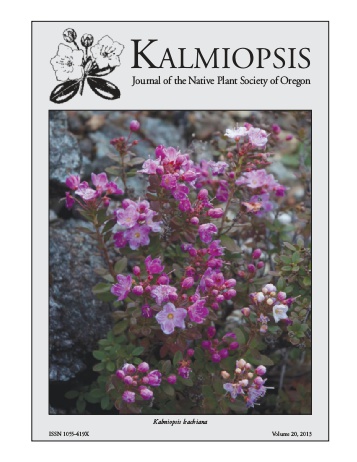 They also publish Kalmiopsis once a year. This journal features more in-depth articles on native plants and is also available on their website.

Beauty in the Bog

The Cobra Lily, Darlingtonia californica, located near Florence, Oregon grows along streams and in bogs. This carnivorous plant is a very clever pitfall plant with nectar inside the hood that lures insects. It also has transparent “windows” in the top of the hood which can look like an exit to an insect. The insects wear themselves out looking for an escape and fall into the trap.

A State of Trees 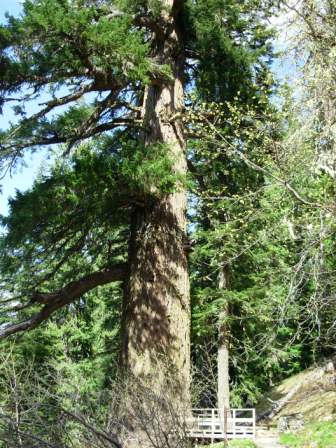 The state of Oregon encompasses about 97,000 square miles and about half of it is covered in forest which means they have a lot of trees. The Oregon Champion Tree Registry’s archive now recognizes the longest living tree in the Pacific Northwest, the Limber Pine, as well as the tallest known Douglas-fir.

In the photo above is the largest Douglas-fir, Pseudotsuga menziesii in Oregon, over 12 m in circumference, and believed to be between 600 and 800 years old. It has survived many calamities, including its top being blown off by a lightning strike. Courtesy of Wikimedia/Oregon Caves National Monument, Oregon, USA.