Pruning: An Introduction: Pruning a Hedge

Growing and maintaining a beautiful hedge requires some care and effort.  Many of the species used as hedges (both evergreen and deciduous) grow rapidly and must be pruned regularly to produce a pleasing shape. We will consider here mainly privet (Ligustrum spp.) hedges but the general rules apply to other types of hedges as well. There are a variety of shapes you can aim for; the best shape for a formal hedge is one with a flat top (see center shape below). The more rounded shapes on the left and right, are suitable for snowy areas where they will prevent heavy snow from accumulating and damaging the top of the hedge. Most importantly, the top of the hedge should be narrower than the base, i.e. the side should slope outwards.  This allows sun light to reach the foliage at the base of the shrub. Without adequate light the base of the hedge will become bare and unsightly.

Begin pruning a newly planted hedge as soon as it is well established and making new growth. Clip off at least half of the new shoots three or four times a year until the new hedge is evenly dense. Aim for a sloped shape as discussed above; use a hand-held pruner to do this. This drawing will give you an idea on how to do this: 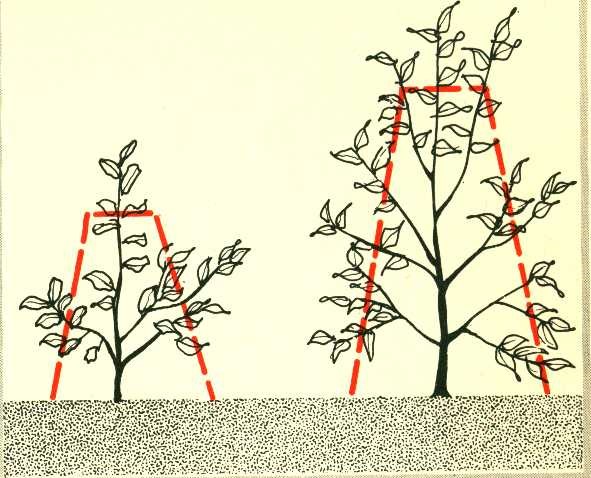 A fast-growing hedge, such as privet needs to pruned three or four times a year. For a slow growing hedge, such a yew,  once a year (in mid-summer) is usually sufficient. This can be done with a hand shears or with an electric trimmer for a longer hedge. To achieve a uniform flat top, stretch a string horizontally between two upright posts to act as a guide and then trim to this line. 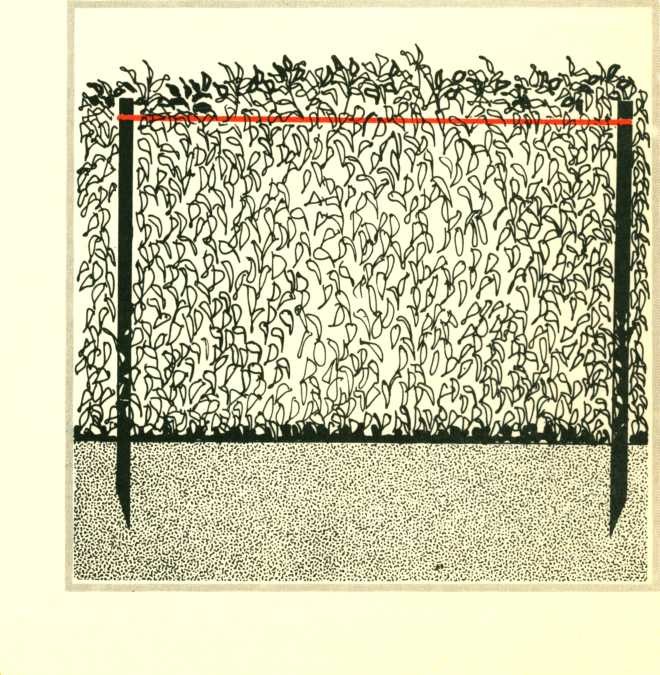 An overgrown, unsightly hedge needs more drastic treatment. If the hedge looks healthy then it can be cut back nearly to the ground (leave about 6 inches or a foot). It will then re-grow and can be shaped as described above. This works best with deciduous shrubs, such as privet. Yews will usually respond to a severe pruning but most conifers will not. If this seems too drastic for you, then trim the hedge severely on the top and sides to at least 6 inches less than the final desired height and width. These procedures will initially produce a very low hedge or one with ugly bare areas. Mulch the hedge well and by next year or so the hedge will look good again.