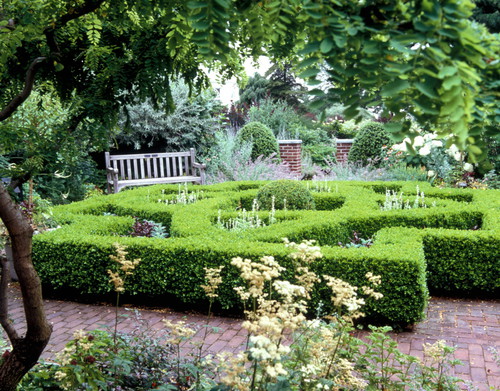 The uniqueness of the intimate Nancy Bryan Luce Herb Garden, found at the northeast corner of the Haupt Conservatory, is evident as soon as a visitor enters through either the wrought iron gate or the brick pillar entrances adjacent to the Perennial Garden. Garden beds with textures and colors of delightfully fragrant herbs surround the formal, symmetrical, boxwood parterre in the center. The garden design is a perfect match of historic formal and contemporary casual, both picturesque and functional. The plant choices define this traditional herb garden which is filled with plants known for their culinary, medicinal, fragrance, fiber and dyeing properties.

Traditional herb garden plants and their layout, brought to this country centuries ago from Europe, were handed down for generations and were often used for teaching medicinal arts. With this in mind, The NYBG Advisory Council, after their success with the establishment of the Ladies' Border (see the Ladies' Border Guide for more information), wanted to create a memorial, herb garden to honor famous garden designer, garden club pioneer, writer and NYBG board member, Louise Beebe Wilder. Influenced by the English gardener Gertrude Jekyll, Wilder adapted a formal, estate, garden style to help shape a more modern, American, suburban, garden trend. Considered one of America's greatest garden writers, she authored hundreds of magazine and newspaper articles and ten books, including the classics Color in My Garden and The Fragrant Path. The New York branch of The Herb Society of America designed the Herb Garden, donated most of the plants and also planted and maintained the garden for decades.

Cut into the center of the lawn , the original, intricate, patterned design of the parterre or knot garden was a Tudor pattern of gray santolina, common thyme and strawberry. Its wooden fence and lawn paths were replaced in 1957 with brick paths, brick pillars and brick walls along with wrought iron fencing. In 1972, an Elizabethan knot garden replaced the original, using santolina, germander, French marigold, artemisia and silver thyme.

In 1991, the English garden designer Penelope Hobhouse renovated the entire Herb Garden, combining European and American planting styles. She maintained many of the charming features from the original design but enlarged the garden by pushing back the brick walls to create a sixty by forty foot garden. New entrances from the perennial garden were added. The brick paths were re-laid in a different pattern than the 1972 brick paths and made narrower, creating a more intimate space. Adapted from a 17th century knot garden, the center bed became twin beds with large pots at each corner. Four benches were placed in the corners and the soil was replaced in the outer beds. When it reopened, the Herb Garden was dedicated in the memory of philanthropist Nancy Bryan Luce.

In 2009, Martha Stewart and her garden staff redesigned the plantings in the garden beds to be as visually interesting as Penelope Hobhouse's remaining knot garden in the center. With a mix of textures and colors, Ms. Stewart used her favorite plants and added some exotic herbs from other parts of the world, animating and enlivening these beautiful beds.

Permanent plantings in the Herb Garden include the center knot garden, which is made up of ninety-two Buxus sinica var. insularis 'Justin Brouwers' evergreen shrubs that grow together as a clipped hedge. The center, round boxwood is Buxus sempervirens. Additional small shrubs, bulbs, vines and perennials are placed throughout this garden. However, for the most part, the plants in the Herb Garden are annuals that are replaced every year and can vary from year to year.

The following list of plant materials were the choices made by Martha Stewart in 2009. Cardoon and golden edged salvia were planted in the empty spaces of the "knots" in the center garden. Scarlet runner beans and passionflower vines climbed the permanent tuteurs (trellises). The pots contained curly parsley and orange violas in the spring. In the summer, snowflake geranium and trailing rosemary and oregano replaced them.

Auricula Theater in The Herb Garden

From April to May, NYBG presents the rare and stunning auricula primroses, planted in individual pots and arranged on a traditional European display, called an "auricula theater". Grown since the mid-16th century by aristocrats and artisans, the flowers are known for their unique, sometimes strange, color combinations and patterns. The primroses at NYBG have been grown from seed and divisions by staff horticulturalists. Before being elevated to an art form in 19th century England, the theaters were originally created as early as the 17th century to protect the exquisite, multi-colored, velvety flowers from rain and wind. The Dowager Marchioness of Salisbury (Lady Salisbury), the renowned horticulturalist who restored her legendary garden at Hatfield House in Hertfordshire, England, designed the NYBG Auricula Theater in the spirit of its original 17th century design.

For specific dates of The Auricula Theater or any other special exhibit at NYBG, view the NYBG calendar or call Plant Information: 718-817-8681, Monday to Friday, 9:30 AM to 12:30 PM or email anytime at plantinfo@nybg.org. For photos of The Nancy Bryan Luce Herb Garden or the Auricula Theater, visit the NYBG Flickr page.