Noteworthy Books Related to this Subject 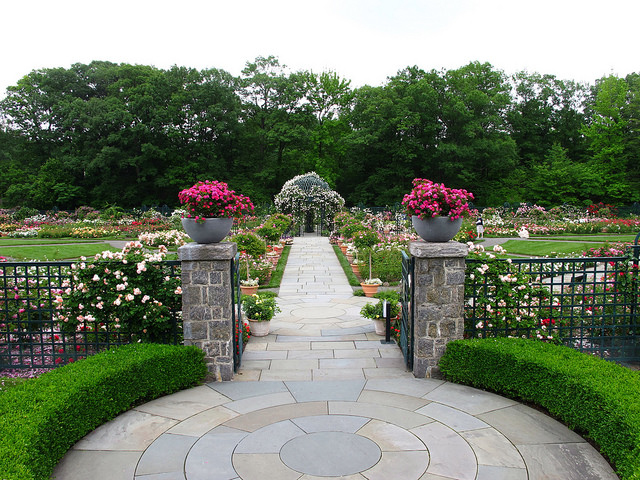 Perhaps you have visited the exquisite French-inspired Peggy Rockefeller Rose Garden at NYBG during the first weekend of June (Rose Weekend) when 10,000 visitors arrive to see over 3,000 rose shrubs awash with hundreds of thousands of blooms. Or perhaps you have visited at another time during the five month rose season and were awed by at least tens of thousands of rose blooms. The garden sparks the interest of anyone who loves roses and gardens, whether they are a knowledgeable rose expert, a home gardener or a visitor enjoying the beauty of NYBG.

As you approach the Rose Garden for the first time, you will know you have arrived when you are looking from a hilltop into a valley that could be a scene from a fairy tale. The fenced-in triangular garden, with spoke-like walkways emanating from the central gazebo, contains rose blooms that look like puffs of color on a background of green. Once you enter the formal gates, you will be in an award-winning rose garden, celebrated as one of the world’s outstanding public rose gardens and included in the Great Rosarians of the World Hall of Fame. It is also one of the largest rose gardens in the United States.

Roses have a rich history, with ancient evidence of origin limited to the Northern Hemisphere, and yet are integral to our present day lives. In the Peggy Rockefeller Garden, you will be entering a world highlighting this ancient and compelling flower called the rose, with its varied colors, shapes, fragrances, sizes, uses, petal counts and habits.

History of the Rose Garden at NYBG

There have been four rose gardens at NYBG. By 1907, the first rose garden, two hundred fifty foot long by eight foot wide, could be found at the east end of the Haupt Conservatory. At the request of Nathaniel Lord Britton, the founder of NYBG, renowned landscape designer Beatrix Farrand was asked to design a new, larger, world class, rose garden. Universities did not accept women, so Farrand learned her trade by studying privately with Sprague Sargent, director of Harvard’s Arnold Arboretum, and visiting the great gardens of England and Italy. She had already designed some impressive gardens, including one for the White House in Washington, D.C., when Britton approached her.

Farrand chose the site where the garden stands today, a low lying “valley” near the barns of the old Lorillard estate. Snuff was made on the estate and rose petals were often added to the tobacco, so some people believe that a rose garden pre-existed on this site (though there are no records to support this.) In November 1916, with $10,000 donated by benefactors such as Andrew Carnegie, J.P. Morgan and W.K. Vanderbilt, NYBG started groundbreaking for the new rose garden. The Horticultural Society of New York offered to supply the rose plants.

In 1918, Farrand’s rose garden opened. Her original design, influenced by the well known rose garden Roseraie du Val-de-Marne (or Roseraie de L'Haÿ) in L’Haÿ les Roses, France, included a gazebo in the center and iron fencing, to create a “more formal frame of an enclosed garden”. These features couldn’t be added because the garden lacked the $3,055 needed to complete the project. Still, the offset triangular garden, with 70 planting beds of nearly five thousand roses, was spectacular. The outside perimeter was planted with “natural, wild species” (or old roses) in a purely naturalistic and informal manner. The inner beds were planted with the “horticultural varieties” (or modern rose hybrids) in a more formal display. Landscape architects John R. Brinley and John S. Holbrook designed the beautiful stone stairway leading from the top of the hill to the rose garden.

Marian Cruger Coffin, designer of the nearby lilac garden, was asked to renovate the rose garden in the late 1940’s. She consulted Farrand’s original designs and made some changes to the beds, adding turf grass and wood posts for climbing roses. By 1951, the redesign included the Elon Huntington Hooker “shelter house” and a raised sitting area funded by Henry F. du Pont. There were over seven thousand rose plants. However by 1960, NYBG had decided to move the rose garden closer to the Conservatory to consolidate all formal gardens in one area. The Farrand rose garden was such a long walk from the NYBG entrances, affecting the amount of visitors, that by 1969, it was abandoned.

In 1972, the third NYBG rose garden, the Edwin de Turck Bechtel Rose Garden, opened in front of the Conservatory, opposite the Perennial Gardens. Bechtel was a garden patron, noted rosarian, lawyer, author and past NYBG President and Chairman of the Board of Managers. He was also Chairman of the Horticultural Society of New York. His wife, Louise Bechtel, herself an expert rosarian, children’s book author, editor and lecturer, funded it. Richard K. Webel and Umberto Innocenti, designers of gardens for the Frick Collection, New York State Governor’s mansion and Aqueduct Raceway, designed the ⅔ acre, narrow, rectangular garden. Geometric circular forms, composed of wedge shaped beds inside the garden, were home to thirteen hundred roses consisting of one hundred and forty varieties. When the decision was made to renew the Farrand rose garden, this garden was dismantled and was replaced with the current expanse of lawn.

In 1985, inspired after seeing the original Farrand design plans, NYBG Board member Beth Straus persuaded David Rockefeller to donate one million dollars to refurbish and complete Farrand’s vision. The addition of a tram ride at NYBG had made the garden location more accessible. In 1988, the fourth and current rose garden, The Peggy Rockefeller Rose Garden, opened to the public, honoring David’s wife, Peggy, a horticulturist and conservationist. Poor drainage was remedied before nearly five thousand roses were planted, representing 400 varieties. A seven sided dark green gazebo and outer perimeter fencing made of steel had been added, consistent with Farrand’s initial proposal. Climbing roses and clematis vines were planted around chain-linked posts near the gazebo. Some of Coffin’s ideas were also incorporated, including the simplicity of condensing the smaller beds into the long outer perimeter beds. In 2006, thanks to a second, $2.5 million donation from David Rockefeller, the Rose Garden received a much needed irrigation system and enhancement of the entryway, pathways, gazebo and signage.

At the opening of the Peggy Rockefeller Rose Garden in the spring of 1988, Carl Totemeier, NYBG Vice President of Horticulture, set the tone for the future of the garden with this statement: “This [garden] will never be finished. We will always be striving to develop a collection with the best of old and new roses that are both attractive and well adapted to the site.” Under the care of first curator Michael Ruggiero (author and then Senior Curator of Horticulture at NYBG), the garden was honored with the 1999 President’s Award for Best Public Rose Garden, given by All-America Rose Selections (AARS). Peter E. Kukielski (NYBG rose curator from 2006 to 2012 and author) renovated the garden with hybrids that performed especially well for the home garden. Hundreds of chemical dependent rose shrubs were removed in an attempt to raise standards of disease resistant plants to avoid such maladies as black spot, a fungal disease rampant in hot, humid weather that causes defoliation. The Earth-Kind Rose Trials, testing for beautiful, low-maintenance roses, were brought to NYBG under his stewardship. Kukielski’s innovative and dedicated work earned the garden many awards, including the Award of Excellence from the World Federation of Roses Societies in 2012, the Great Rosarians of the World Rose Garden Hall of Fame Award in 2010 and America’s Best Public Rose Garden Display by AARS.

Stephen Scanniello, author and recipient of the Jane Righter Rose Medal from the Garden Club of America in 2013, and president of the Heritage Rose Foundation devoted to preservation of old roses, is the current curator of the rose garden. Scanniello’s love for rescuing old proven and historic roses, while finding and evaluating wonderful new hybrids, continues to enhance the garden’s performance and overall beauty.

Today, the Peggy Rockefeller Rose Garden has over three thousand roses representing more than seven hundred varieties of old garden roses and modern roses (bred after 1867), many of which were donated by the hybridizers who created them. Most of the old roses will bloom only once in the beginning of the season. Moderns will re-bloom and some may even bloom all season. NYBG is striving to showcase disease resistant varieties that will perform well in any garden.

The Rose Garden is usually closed to the public on December 1st. Depending on the weather, it usually reopens mid April. The NYBG calendar is a good resource to plan your visit.

To read about some of the fascinating and beautiful roses on display in the garden, go to the "A Walk Through the Garden" tab at the top of this page