The Azalea Garden at NYBG: Home

Noteworthy Books on Azaleas and Rhododendrons

The Azalea Garden at NYBG 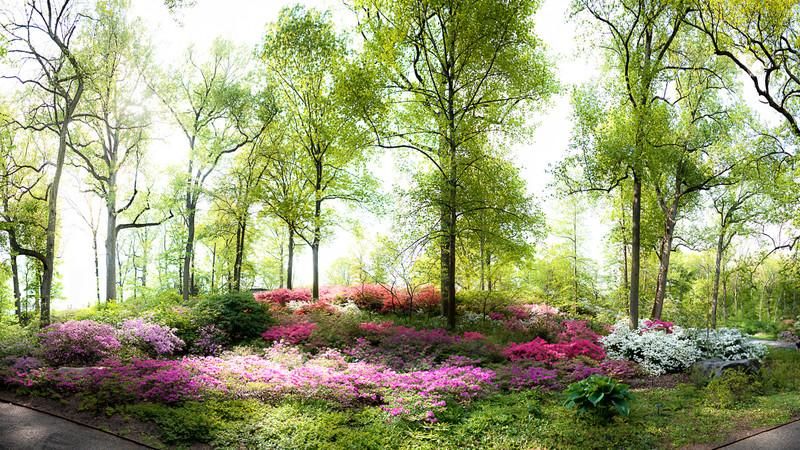 While the NYBG perennial garden can be considered a jewel and the rock garden a work of art, the Azalea Garden is an adventure. One cannot see the extent of the garden from any one vantage point, as its terrain of rock, meadow and woodland divides the garden into distinct worlds. With its encyclopedic collection of azaleas and their close relatives the rhododendrons, the hillsides are spectacular with explosions of color during peak season. Amongst ancient tall trees, splendid understory trees and sunny open areas, are diverse and creative planting combinations of both common and unusual herbaceous perennials and bulbs. It is no wonder that many at NYBG consider the Azalea Garden the “Heart” of the NYBG garden.

A one-mile pathway meanders through the eleven acre Azalea Garden, which contains 3,000 azaleas and rhododendrons specimens, all in the heath family (Ericaceae). There are also additional plantings of 40,000 bulbs, over 28,000 woodland perennials and ferns, and more than 3,000 trees and shrubs. Some original residents, sixty majestic ancient oaks, tulip trees, elms and sweet gums, overlook the craggy rock outcrops and curving stream that comprise the bones of this expansive garden.

At its highest point of fifty-five feet above the entrance level, a special feature along the pathway is an overlook with expansive vistas in all directions of not only the Azalea Garden, but of many other NYBG treasures. As a result of NYBG’s goal of planting one million Narcissus bulbs on Daffodil Hill (looking west from the overlook), spring will bring an ever-increasing massive display of yellows and whites, including both antique and new varieties. Looking east, beyond the azalea bank, are views of the Stone Mill, a 1840 NYC landmark factory building that has been restored and is now used for catered events and NYBG offices.

The azaleas and rhododendrons start their overture of pinks and lavenders in early spring.  At their peak in late April and early May there is a profusion of colors including white, salmon, mauve, pink, purple, and all variations of red, orange, and yellow. Fall blooming azaleas are joined by the Rhododendron Encore series, developed by Robert E. “Buddy” Lee, which develop new shoots and buds after their spring bloom for midsummer to fall flowering. Even late winter has pink-purple blooms provided by one of the few deciduous rhododendrons (Rhododendron mucronulatum).

The NYBG azalea collection highlights the tremendous diversity in this single plant group. Exotic species have been collected from remote areas around the world including China, Japan, Korea, and the Caucasus Mountains. The native azaleas in the garden, all deciduous, have been chosen from 41 of the US states, including nearby local habitats. Azalea hybrids, bred for hundreds of years to bring out the best traits of each of the parents, are on display from well-known plantsmen and nurseries such as B.Y. Morrison’s Glenn Dale Group, Weston Nurseries, Carlson Gardens, Col. Ronald C. Vines’ Holly Springs Group, and Joe Gable. (Click for links for general information about azaleas and rhododendrons – and specific information on native, hybrid and exotic azaleas.)

The area called the Azalea Garden has evolved considerably over the years. The azalea/rhododendron collection originated with plants gathered in the mountains of North Carolina and planted in 1910 amidst the rolling topography and rock outcrops of the area. In 1929, more azaleas were planted to enhance a memorial bench donated in memory of Elizabeth Bigelow Estes; steps and the bench were designed by landscape architect Norman T. Newton to blend with the naturalistic setting. Pachysandra, mountain laurel, hemlock, dogwood and yew were also planted. Barely visible now, the memorial sits in the shade near the picnic area behind the Azalea Garden.

By the 1950’s the garden was called “Azalea Planting Glen”, where the plants thrived in the rocky, shady location. In 1959, eight more acres, making a total of ten acres, were planted on the hills along the roads that are now named “Azalea Way” and “River Way”. In 1969-1970, the garden was named the Sherman Baldwin Azalea Collection in memory of Sherman Baldwin, beloved NYBG board member and legal counsel to NYBG for 26 years. It was renovated in 1989 and again in 1999.

Planted just in time to open on Mother’s Day in 2011, the current Azalea Garden, funded by Mr. and Mrs. Richard L. Chilton, Jr., garnered international attention and praise when it opened. It’s success was due to a collaborate effort of numerous distinguished landscape architects including Laurie Olin, who is in charge of the NYBG master plan and Shavaun Towers who focused on the pathways, seating and the overlook. Sheila Brady (of Oehme van Sweden Landscape Architecture Firm) designed the plantings that complemented the azaleas. NYBG VPs Todd Forrest and Frank Genese led the NYBG staff who took part in the design of the garden, acquisition of plants and planting of the gardens. Other NYBG staff who contributed to plant selection, designing and installation include Travis Beck, Kristin Schleiter, Jessica Schuler and Deanna Curtis.

In addition, Jim Gardiner (Executive VP of the Royal Horticultural Society) assisted in choosing azaleas and rhododendrons. Experts John Mikel consulted on the ferns and Darrell Probst on the epimediums.

A Walk Along the Pathway

From the main entrance of NYBG, take the road that turns to the right at the Reflecting Pool. Continue down the road, passing between the Everett Children’s Adventure Garden on the right and the Native Plant Garden on the left. In spring, a hill bursting with lavender and pinks azalea flowers on your right, signals that you are near to the entrance of the Azalea Garden. Further along, on the right, the formal entrance is inviting with the beginning of a blue stone path and two circular low benches on top of stone wall bases. This area sets the tone for most of the garden; low massive plantings of textures and color complementing either a featured azalea or groupings of azaleas that emerge and carry the eye forward along the path. Continuing its commitment to education, NYBG has included descriptive garden and plant signs, as well as a self-guided cell phone tour along the pathway.

Continue to the path on the right and follow it to the North Knoll. In this elevated, rocky area, a grouping of native azaleas can be glimpsed before returning to the main path. Seen here is Rhododendron ‘Madame Butterfly’, a Kaempferi Hybrid Azalea created at Deerfield Nursery in New Jersey, that has white flowers with touches of lavender and chocolate or chartreuse . Turn around to retrace your steps down the slope and make a right turn to continue on the main path towards the steps.

Along the main pathway, you will see masses of some of the fifty-one different kinds of barrenwort (Epimedium) in the Azalea Garden. Pink and white Rhododendron yakushimanum, with distinctive furry brown leaf undersides, are planted along the steps. There are unusual, dwarf perennials found in this area such as hostas (Hosta ‘Tiny Bubbles’, H. ‘Saishu-jima’, and H. ‘Blue Mouse Ears’), iris (Iris gracilipes 'Alba') and dwarf mondo grass (Ophiopogon japonicus ‘Nana’). On the right at the top of the steps, Rhododendron ‘Primitive Beauty’ sits, a spider azalea bred by Tom Dodd, that has unusual long slender individual petals and thrives in full sun or part shade.

The garden continues to adapt to the terrain as you emerge into a clearing called the Summit Meadow, reminiscent of grassy areas on mountain slopes in the Appalachians. In springtime, this spot is surrounded by blooming azaleas and color everywhere. In the fall, there is a profusion of purple flowers amongst the russet, bronze and gold of the grasses, encircled by the reds, yellows, and oranges of the autumn tree foliage. Within the sea of autumn moor grass (Sesleria autumnalis), are perennial groupings of delicate white guara (Guara lindheimeri ‘Whirling Butterflies’), colorful Stokes’ aster (Stokesia laevis ‘Peachie’s Pick’) and stunning gentian (Gentiana ‘True Blue’). Hybrid azaleas, many of them dwarf, created by the Polly Hill Arboretum in Massachusetts, are featured here.

As you approach the lookout, on your right is a grouping of fragrant, yellow and orange, deciduous, pontic azaleas (Rhododendron luteum), natives of Europe. Step onto the lookout and enjoy the full effect of thousands of azaleas covering the hill in the area called the Azalea Bank. Beyond the bank, the Stone Mill is barely visible through the forest. To the right, there are dramatic vistas of the South Grove section of the Azalea Garden.

Leaving the overlook, make a right to take the path that will bring you back towards the garden entrance where you started. Marshy Point hybrid azaleas, hybridized by Harry Weiskittel, have large flowers, some striped, spotted, or bicolored. The smooth hydrangea cultivar (Hydrangea arborescens ‘Hayes Starburst’) featured here is compact and blooms into the fall with double white florets and a colorful yellow fall leaf. Ben Morrison hybridized 454 azalea cultivars including a grouping along this path. Notice the magnificent red oak (Quercus rubra) specimen and massive planting of cascading golden hakone grass (Hakonechloa macra ‘All Gold’). When you reach the end, backtrack up to the outlook and continue forward on the path, past the outlook and down the hill along the South Grove.

The South Grove is heavily wooded with mature trees underplanted with native deciduous azaleas and shade-loving herbaceous perennials. A stream marks its outer edge on the south end. The trees have been limbed up (lower branches removed) thirty feet, creating the effect of a cathedral ceiling, so the breadth of the plantings can be seen from any point along the walkway. Over two hundred European gray sedges (Carex divulsa) create a dense grass-like groundcover. Pinkshell azaleas, represented here by cultivar Rhododendron vaseyi ‘White Find’, is a wild azalea found in the mountains of North Carolina and Georgia. Pale green and orange flowers that actually look like tulips adorn a towering tulip tree (Liriodendron tulipifera), the largest tree in the azalea garden. Hosta ‘First Mate’ (and further along the path Hosta ‘Sum and Substance’) are just two of the 76 different varieties of plantain lily in this garden. As you walk along the outer edge of the South Grove, and past a giant black oak (Quercus velutina), the path continues under crabapples and through hundreds of daffodils.

If you stay on the path along the stream to the left, in front of you is a gigantic rock outcropping with more azaleas, a dogwood and a witch hazel. Don’t miss the enormous pink flowering Rhododendron ‘Hinomayo”, a Kurume hybrid, on the other side when it blooms in April.

Continuing along the path, sun-loving masses of threadleaf bluestar (Amsonia hubrichtii) line the stream. A giant sweetgum tree (Liquidambar styraciflua) and grayblue spicebush (Lindera glauca) contribute rich leaf color in the fall. Coming around the bend, you enter the swamp area of the forest and are greeted by a swamp white oak (Quercus bicolor), prized for its beautiful ridged bark. Cross the bridge to see water-loving plantings on the right and native azaleas, including the spicy fragrant swamp azalea (Rhododendron viscosum) on the left. At the end of the path, where it meets the road, turn left to see the last part of the Azalea Garden along the road.